1. Look in dismay at the pile of things to do and clothes to mend on work table

2. Discover one basket under pile. Remove silly lining and put basket to use in bedroom.

3. Out of not-knowing-what-to-do-with-it-now, pull lining over sewing machine:

4. Leave it right there until it's going to be ironed one day :-)

Email ThisBlogThis!Share to TwitterShare to FacebookShare to Pinterest
Labels: Sometimes I stitch

Many of you might have seen in the news the terrible events unfolding at a mine in my country today.

Many versions/interpretations of what happened was sent out into the world.

It is about trade unions in a stand-off against each other, against the companies. It's about fat cats in offices in Joburg playing games with their human pawns, because the pawns are mostly just workers desperate to make a living.  Thousands Just Want To Work .

It is about ancient superstitions that lead these men to believe that drinking/sprinkling themselves with some unthinkable concoction would make them invincable, unable to die, untouchable.

Now as many as 25 people might have died since the start of the violence last week. Men leaving behind families; women and children. In an already dire economic position, these families will now even have less. Their men will be buried, a huge funeral will be held with union banners, cows will be slaughtered and T-shirts distributed - and the union bosses will go home in their big shiny black German cars.

But the union guys will be ok; they may think they have won a battle, they will scream even harder for nationalization.

"Ah, but your land is beautiful", people say.

But it is also drenched with tears.

Email ThisBlogThis!Share to TwitterShare to FacebookShare to Pinterest
Labels: My Mzansi, Things and thoughts

Oops...I'm a bit late...but this is one of the things I've been busy with last week: 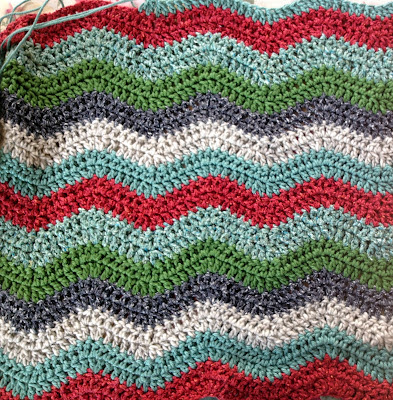 A third ripple, this time for a big fat cushion for ME.  Made up with ultra lovely Rowan Handknit Cotton, Rowan Summer Tweed, and Rowan Tweed.  The denim blue is a local 50% cotton.

For more One-A-Day projects, have a look at Carole's Gingerbread Girl Blog.