What I made with Moya Bulky Plush

Moya Yarns was so kind to send me another sample pack - this time the supersoft Bulky Plush. 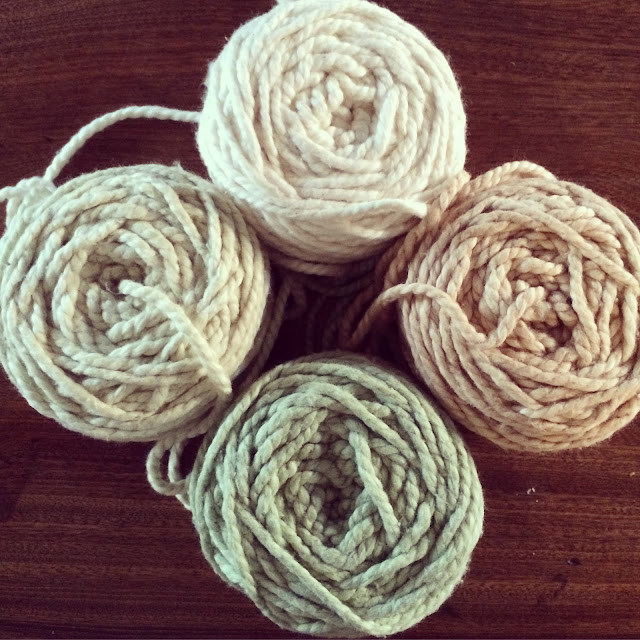 Did I mention that it is soft?

I had to make something small (because of the thickness, there are not too many meters on a cake!).  The softness would most likely indicate something for a baby - a beanie, soft blanket or playmat, what about lounging slippers for myself?

There was a project lurking in the depths of my cupboard, wooden hangers waiting oh, so patiently to be covered, and I thought that this new bulky yarn would do that in a jiffy.

With a yarn this thick, I thought a plain and simple cover would be best.  It wouldn't even need padding underneath!

It was an easy-peasy project, superquick if you wanted to throw in into MIL's birthbay parcel in a few days!

I was a bit undecided about the joining - the first one was simply crochet together with SC.  Then I didn't like the ridge so much and thought I'd sew the rest together.

I don't possess a needle thick enough to carry that yarn.

Plus, I didn't leave a tail long enough to do that!
#whatwasIthinking

But in some or other way the covers were fitted and joined, embroidery yarn might have been involved.  I decided to leave the metal hooks uncovered - haven't had much joy with the plastic piping available and didn't want to faff with twisting and glueing yarn around the hook.  Simpler is anyways better, don'tya think?

I really enjoyed working with the Moya Bulky Plush.  Bear with my limited knowledge of yarn characteristics - but the brushed cotton-like texture  makes it a joy, no slipping of yarn! It worked up really quick.  My nr 6 hook might not have been the best though - I wanted a dense finish, but in retrospect the nr 7 would have look better.

All in all, I'm a happy hooker and found this yarn absolutely perfect for clothes hangers.  No slipping of blouses off these babies, and no funny marks on a thin cardigan!  There are some ladies who started out on blankets with the bulky plush and I really look forward to see those.

Email ThisBlogThis!Share to TwitterShare to FacebookShare to Pinterest
Labels: clothes hangers, cotton, Moya Yarn, What I made with Moya

Ooooh, I can sometimes fly right away with an idea, just to burn out five minutes later or get lazy, which is not a good thing.

So I was watching the Rustic Lace frenzy, finding most of the squares utterly beautiful, but in no real need to make one myself (just finished my summer throw in a large lacy square).  But then...then Charlotta (Instagram: intheyarngarden)  accidentally made a triangle and when THAT turned up in my Instagram feed, I could feel gears in my head shifting and clicking and in a mad rush (FOMO, anyone? :-D ) I proceeded to dig out the natural Moya that was earmarked for clothes hangers and let rip, hook flying.

Until I had two or so complete. First the squares.

It's still very pretty, but looks totally different.  And I might have been a bit irritated by the little piece of yarn that was super twisted (look, there at half past six in the photo), but couldn't be bothered to  cut, frog, join up again, or start from scratch. Noooo.


To divert the quickly waning attention span, I diverted to triangles.  (Did I mention that I made the exact same mistake at my first take on the square? But that mistake doesn't give you a relaxed, flat triangle, so I wanted to plan it properly. )

Out with the pen and paper.

I have no intentions of ever coming up with a new crochet pattern for anything, so I literally just wrote the whole pattern out, and estimated possible changes, which would include a cluster or two less here, and some chains extra there, then tried it out and tried again and again and again and again until I got a reasonably flat triangle.

I figured I'd need three squares and 3 triangles to make up a little mock curtain for one window in our bathroom.  To my dismay, it might have had to be four of each.  So I was getting a bit impatient with myself, as I still had to figure out how to join these, and then how to hang it!

It was around this time that I did a quick, exploratory stroll through a new favourite second had shop and lo and behold, there it was! A crochet piece, by the look of it the perfect size (to the millimeter it was!), just ready for me to hang in the window.

It was a no-brainer.

Since I was so far with the Rustic Laces (3 each, then) I had to come up with a Plan A for Alternative, which I thought would be the little window in the guest loo.

I promptly diverted again and started on a long-anticipated shawl.  Then it came to me...Plan B for Buggered...the window in my little craft storage nook upstairs...but I would need 5 of each.

There's a Google-pot full of info on and versions of the Rustic Lace Square, but here's the beautiful blanket that Magda Pigtails made, and she in turn got the idea from Cornel's blanket at HalloHart.

Email ThisBlogThis!Share to TwitterShare to FacebookShare to Pinterest
Labels: crochet curtain, Moya Yarn, Rustic Lace Square, What I made with Moya

Our Cheap & Cheerful Challenge has finished!

What a joy to see what these ladies came up with, to show that even some of the cheapest yarns around CAN be used to produce a beautiful blanket.

Here's the info on the background of Cheap & Cheerful, and my own contribution

and these were the three winners:

Helen chose to work with Chick, the very cheap supermarket acrylic that I also chose, in two blues, grey and white.  Upon finishing the blue and grey motifs, she realised that gaps between these were too large for her liking and  - given the restricted colour choices of Chick - came up with the plan to dye some her acrylic yarn (easier said than done!!).  Google and YouTube came to her aid and she added the brownish motif with white center - and it was as if the blanket was designed to look like that.

I love the unusual colour combination and the handdyed effect on the brown.  Plus the snowflakes brighten everything up.

A beautiful blanket and clever solution.

Everybody's seen the Corner to Corner blanket, and many have been making it, right? There have been some beautiful variations, but you haven't seen it all until Helene's came along.

Three colourways of variegated Pullskein scream at each other...until you work it together, alternating after each row. Then it absolutely work, and blend in, the one with the next, into a harmonious, pastel rainbow.

These colours had Ons Hekel swooning.


Lara used the same almost shock tactic with her chevron blanket.  Who would put red and pink together with ...brownish and greyish? And yet the colours and stitch patterns mellow together, making the photo jump out from the rest.

See what can be done?

There's no reason to think you can't make a beautiful item because you don't have great yarn.  Sure, working with Vinnis, I Love Yarn, Malabrigo, Rowan makes it a lot easier, but you can also get by with what you can find at the local co-op or supermarket.

I was so happy to see these three and the other entries.  And all 20 will make a difference as part of the Make A Difference charity, to be distributed come Winter 2016.

Well done ladies, be proud!  And enjoy your gifts packs :-)

(Thank you to Yarn in a Barn, Dalena White of Cape Wools SA, Brilliant Mommy for sponsoring some prices, as well as yarn donors!)
Posted by Stel at 22:01 2 comments: