Being married to an after-hours endurance athlete, means a lot of road tripping to nice places, of which my South Africa has no shortage.  So this weekend we went off galavanting to the Trans-Baviaans 24hr Mountain Bike Marathon where  our team of four rode into the mountains, following dirt roads, single tracks, orienteering through the kloofs and slipping down snot-like mud downhill towards thick gravel and potholes.  They started at 10h00 in the Karoo town of Willowmore and had 24 hrs to make to to Jeffreys Bay.  They're allowed only a 1-person logistical support and the checkpoints, and none on the road.   Our novices did quite well, considering one broke his chain in three places, and another had to be medevacked (but is now fine), and they're happy with their finish time of 14:40.

That was at 00h40 in the morning .
#imstillblearyeyed

We, the Wives of Cyclists,  did what the support team does and that is to take a long, slow drive, and pitstop at nice places along the route :-)

First stop was at The Heath, a favourite for good coffee on the the N2 and a nice spot to find some community project hooky:

Onwards to Old Nick's Village, where I walked with my hands firmly tucked behind my back at Mungo's and just had time for a quick dash through on or two doors...


By that time our boys' support vehicle reported a pitstop at a local church bazaar (fête) and lo and behold, it was just up the highway and 8 km off behind the mountain, so there we went!

The community of the tiny hamlet of Kareedouw hosts a Fietsfees (Bicycle Festival) during TransBaviaans weekend in the form of a bazaar on the church grounds:


As church bazaars go, there was some craft to be found, and  spotted this beauty of a baby blanket:

And again, beautiful work from a community craft project, and I walked away with new washpeg bag and these potholders for me and my sisi:


A most enjoyable, tiring weekend, with very little of my own hooky being done!
Will catch up, hoping for a quiet morning :-) 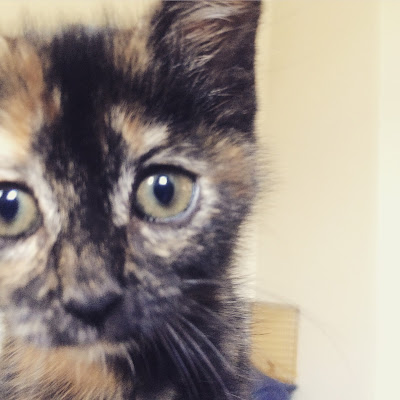 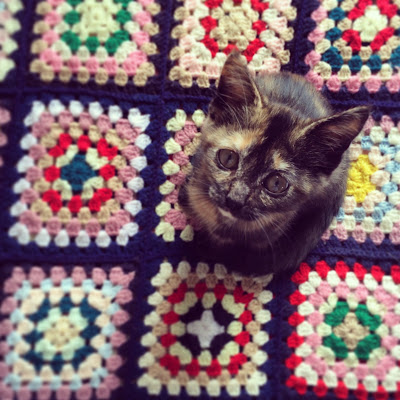 Tommie was my (okay, my son's) very first kitten.
We got her as a rescue from the local SPCA for his 7th birthday after he's been pleading for months.  Although she was his, she was also mine, my constant companion during the mornings at home, following me and calling me if she didn't immediately see me, fighting with my hands when I folded laundry until I had to cage her with the laundry basket, walking round and round the edge of the bath, waiting for me to get out of the water (she fell in twice :-) ). 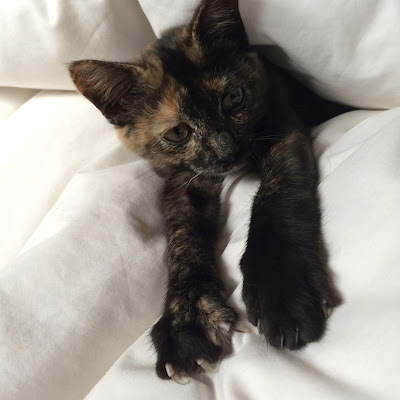 She was such a bloody oulike cat.

So last week terrible Friday I started sorting my Vinnis and other cotton and bamboo yarn stash, putting together colours to use in a month or so when I would start working on summer blankets for the boys.  I decided to make a simple Granny Stripe for the Little One, as he already has a smallish Granny Square blanket.  As it is when sorting yarn and making Big Decisions like this, I thought I'd just start with a row or two, just to get an idea...you know... 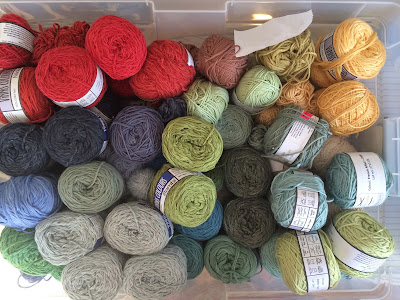 And then the Horrible Afternoon happened, and we had a Cat Funeral, and took the boys to the beach to get them away, and I diverted my Little One's attention by telling him about his new blanket that I started that morning, and that he could remember Tommie when he cuddled under it and by the end of the day I was ten rows away and made promises of a crocheted kitty appliquéd on the blanket.

SO here I am, hooking away on this one, shoving other plans and projects to the side. As usual, there is a Formula to my colour sequencing :-P 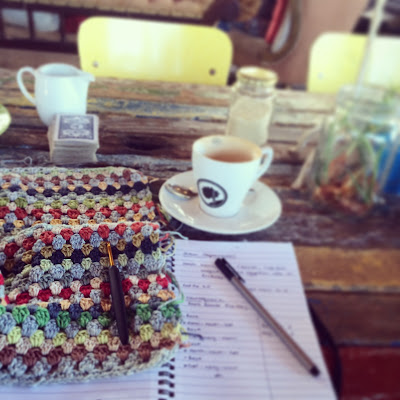 Meanwhile, I'll be scouring the universe for crochet kitty patterns to appliqué - feel free to point me in the right direction!

At last I'm finished with a blanket that shouldn't have taken me more than a few days!
(But alas, I don't have the attention span).

A couple of months ago I launched a Cheap & Cheerful Challenge on my FB group and explained a bit more in this post.

Basically, it boiled down to showing that you can use dirt cheap acrylic yarn, but still hook something pretty; that cheap yarn doesn't have to equate to shrill, ugly colour combinations.  This challenge was not about the quality of the yarn, but about using the cheap supermarket variety, or worst case - that only yarn which is available to you.


Also available were brilliant white, pitch black, lemony yellow, light minty green, emerald and primary green, and some variegated combinations of the above.  And grey.

I took the grey (let's be fancy and call it silvery grey), plus denim(ish) blue, a ball of emerald, plus the blue, emerald and something else variegated.  The variegated was dismissed to the donation bag after 2 or 3 rows of trying it out, and with it went the emerald.  So that left me with the silver-grey and denim, which suited me well, as I was after a simple look, simple colours, and something suitable or a man (the idea was to donate these blankets to the Maak 'n Verskil group who will distribute to various charities again).

I decided to wing it, aiming for a basic stripey blanket that I made up as I went along. One silver-grey between blues became two, became four and so on, until I'd reach a midway point and reverse back.


As this was a simple blanket to hook, I could easily tag it along and it was particularly useful during cold road trips!

It was also useful during cold nights in front of the tv!


And then, after taking on and finishing numerous other  projects, it was done.  Even so, it took me another bloody week to just sit down and get to the ends!

I didn't make it too big, only suitable for a lap blanket (useful for wheelchair users or to use while sitting), or then for a baby.

I haven't worked with Chick ever, before this challenge, but have used other acrylics numerous times. Truth be told - it wasn't that bad to work with this yarn, in the sense that it produces a neat, tight stitch and it didn't split (which is a common occurence with the nicest cotton yarns...  :-( and I could live with the squeak as I knew it was coming.

That said - I won't work with it again. Not for any of the above reasons...but that's a story for another day ;-)

But here'a a useful blanket that someone who needs it can use, and it won't hurt your eyes.  And that was the purpose of the exercise.

Next post: some of the blankets that came in .