Email ThisBlogThis!Share to TwitterShare to FacebookShare to Pinterest
Labels: Things and thoughts

I didn't plan to even look at a computer while on holiday, didn't think to roam on my phone or use it for it for  anything other than taking photos...but after four lovely days of blue skies, some cloud and light snow, lots of playing, skiing, falling, snowballing, the mountains of Tirol are hidden behind...white.

It is all white outside!

We were woken by the first snow plough at 06h00, clearing the street and pathways.
The frozen pond in the backyard has disappeared beneath a thick white blanket, the bare trees are decorated in white and slowly and steadily, thick white snowflakes are drifting downwards.

Imagine the excitement for us - sun babies from South Africa!

Even staying inside, watching the snow, is an adventure.

In the meantime, there's a book to read, chocolates to be eaten...

And some hooking to be done :-)

I bought this absolute cheapest of cheap 100 % wool in a 500 g mixed bag of leftovers. The colours looked good together and immediately shouted "stripey bag". It is too coarse to do anything but a bag or placemats, so bag it would be.
I started with a pattern for a small, square bag, but made the bottom larger and will be widening it slightly as I go up - as long as the yarn lasts!

As for straps - that question remains to be answered and I'm open to any ideas.

There's a glimpse of sun coming through the white now! Might be getting out and about then :-)

Imagine flying for the first time in your life.

Imagine getting your very first car, driving further than 5 km for the first time, driving back home that 1600 km through countryside you have never seen, alone, with your new car.

That is what our Waka did, these last two days.


Waka has been working with us since 1998, when he lost his job at the geological consulting company where my husband just starting working.  He got his nickname because he addressed everyone as "wa ka" (= mine), refusing to call anyone  "boss". He is  (formally) unskilled, having attended school only up to Gr 4. He also has limited use of some of the fingers on his right hand - his wife was accused of being a witch and he defended her against an attack with a panga (machete).  The ligaments at the base of his fingers were severed and never treated. However, he has the savvy and street-smartness of ten people, speak/understand quite  few of the indigenous languages, and knows the Limpopo Province like the palm of his hand.

So he started working with me, acting as my guide.

For five years we criss-crossed rural Limpopo, from larger towns to tiny villages that doesn't even appear on maps other that topographical sheets, from large egineering projects to places where the children ran away from me because they have never seen a white woman before.  He guided me through villages known for harbouring Gauteng criminals, through the 'double-up' of the 'double-up' (shortcut of the shortcut).  We saw some of the most spectacular scenery in this country, ate mangoes from an old mama's backyard in Venda, dug ourselves out of deep sand in Lebowa.

I trusted him with my life, he was invaluable to my work.

Then we moved back to Pretoria, had sporadic contact, we moved to Australia, and upon our return we found him working at a large wholesale nursery group. He lived in a hostel with other men, had to wash at a tap outside, fixed his meals on a primus camping stove and earned a pittance.  He couldn't support his wife and three kids.

So  he came to live with  us and started to work as our gardener, "general manager", child minder if I have to dash to  get milk, head of security, handyman, parking attendant (that was to help him get his driver's licence) and anything else.  We fixed the outbuildings as a tiny flat for him, he earned much more that at the nursery, and could go home more often. He was cheated out of his allocated RDP-house, so we helped him get another and build his own house, independent from government assistance, which now has three rooms. He named his twins after us, Fani and Crystal.


This year my husband promised him his own bakkie (= pick-up truck, ute) if business went well, which it did.  We searched and searched, couldn't find a suitable one locally, but then a friend had one for sale in Cape Town. But now - how to get it to Pretoria?  Lo and behold, a new contract came through that required a meeting in Cape Town, and within hours plans were made.  He would fly down with Fanie, they'd get the bakkie, Fanie would guide him out of town and put him on the N1 national highway, direction north.  I started printing maps, highlighting the routes, towns/highway filling stations where he should stop, arranged accommodation halfway, and off they went!

He was slightly nervous, but excited about the flying.  They got seats right in front and he marveled about the cockpit, declaring it much more "difficult" than a car's.


He observed that they must be much nearer to Nkosi (God), as the ground and people were far below, and they were now flying above the cloud.

He though the pilots must be very clever and good drivers, to be able to descend through the cloud where you can't see a thing.

He is the very first member of his extended Madubanya family to ever take a plane trip.


There wasn't time to stop at the beach but he could see the size of the ocean.

The long road was a big challenge.  He's not used to long-distance driving himself.  But he's got enough savvy, and many people followed his progress on my Facebook page, and prayed.  He was to text me when he reached the larger towns, so I could make sure he stays on target, stays awake, and eats and drinks on time.

He marvelled at the 'very big mountains'  of the Western Cape.  He suffered in the extreme summer heat, driving a 1300cc vehicle with no air-conditioning, negotiating the very busy oncoming holiday traffic.  Because of that, my husband also instructed him to drive way below the speed limit, and he  kept going at  90, 100 km/h. He easily found his targets, was aghast at the many accidents involving truck (driving past 4, witnessing a 5th, he called me to say at least nobody died in this one). He wasn't going to make  it  to Colesberg for the night, so I hastily arrange accommodation in Beaufort West (and couldn't be grateful enough to the very kind Anthony of Young's Budget Accommodation, who waited in front for Waks to arrive). He looked out from afar for the hill at Beaufort West ("it  is not big as the mountains behind, it look like Blouberg in Lebowa").

The next morning we spoke with him early, as it was still a long way to go, and he had to get on the way.  It was much easier, less  heat, less traffic.  He called to say he went through a very big river, blig like the Limpopo (that was the Orange, boundary between the Northern Cape and Free State).   He took a long stop at Trompsburg, 'so the bakkie could rest'. Cold drink stops came at Bloemfontein and Ventersburg. He was almost home.  Two truck stops awaited  when he crossed into Gauteng, quicker now on the double-laned highway and we advised himto get enough Coke and  Bar One - the man was tired now! 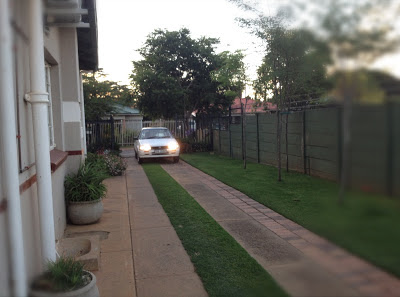 And around seven, he arrived home.  Joyous affair!  He just sat back, threw his hands in the air and said "Waks! It is a very long road."  But he was all smiles.  He just about greeted everybody and stumbled to his room, where the lights remained for a long time still.   We could hear him chattering on the phone with the family, telling them all about the the adventure.  His head must have been spinning. 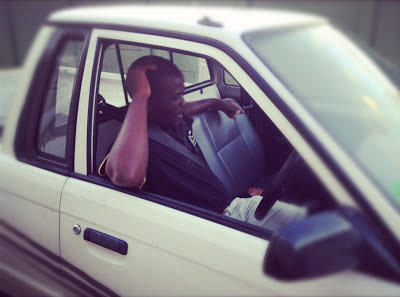 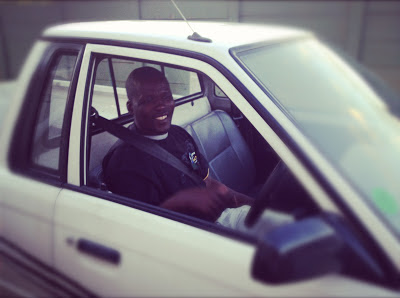 We'll chat about the whole trip again, later.  It was such a privilege and joy to follow him over this two-day journey! So many people enquired and send messages and prayers -  thank you to all.

This was an epic trip.

(He just took Fanie to McDonalds, to get breakfast :-)