Which might be like trying to find the chameleon on the Smartie Box, as not only do we have 11 official languages, we have more than that number of different cultural groups in this country.  So that's not including the Khoi, San, Indian, Chinese, Italian, Portuguese, German, Greek, Jewish and how many other large communities.  Plus the 'coloured' community that is e.g. not perceived Afrikaans by some, or some of themselves, but ís by other.  And the fact that Afrikaans and English (white) South Africans sometimes differ more than the (white) Afrikaans and (non-white) Zulu South African.

(Now, to humor yourself, and get an idea of our South African sense of  humour, get your hands on The Racist's Guide to the People of South Africa by Simon Kilpatrick.  It is not what it sounds like, and is an hilariously funny GENERALISED look at the people in my part of the world.  We do laugh at ourselves :-)

So, my heritage - what would that be?  Given the grandparents' surnames, I'd be 50% Dutch (with some Scottish way back), 25% German, 25% French Huguenot. Throw in some mixes and matches along the almost 3 centuries some of them had been here, and I'm a toroughbred mix. My husband has more German, I think 50% there, and some English and quite recent Scottish as well.

And little remain of these original cultures.

So what do all of us have in common here?


We like to throw a piece of meat over the coals.  We BRAAI.


("Barbie" is Australian over a gas fire.  "Barbeque" is a hamburger pattie or pale pork sausage up north)
We  like to make a fire with wood or charcoal, and let it sizzle.

And so enters clever "Jan Braai" (in real life Jan Scannell) who decided that we, the people, need something like the Irish Paddy Day, the Dutch Queens Day, US Thanksgiving, Australia Day - something that is truly OURS...and he declares National Heritage also "Braai Day".  That is the one day that most South Africans can do the one thing that most of us truly embraces and have in common: to have a braai.  Luckily for him, the Arch immediately embraces the idea, giving it more clout, and it has been growing ever since.

So today, we'll have a braai.  Some lamb chops marinated with balsamic vinegar and rosemary, venison sausage maybe, a nice garlic-and-cheesy loaf, or tomato-cheese-onion-apricot jam sandwhiches, or maybe some putu pap with sheba.  There will be some form of salad to make up for vitamins, a beer and/or rosé to wash it all down with, and we'll end with a great coffee and maybe melktert.  (Ooh, now that is something to behold...we got it from the Dutch, spiced up by the Malay, similar to Portuguese custard tart and also French custard tart - we just add cinnamon.  I've made it with star aniseed, cardemom, lavender, rooibos...njam!)

Have a look at Jan Braai's Facebook Page and a listen to this great South African song, while we light the fires!

Email ThisBlogThis!Share to TwitterShare to FacebookShare to Pinterest
Labels: My Mzansi

Almost there.
The last corner squares are halfway done, one other to FROG and redo
Then a simple edge - one granny row in the light blue, followed by 1r trebles, 1r htr, and the 1r htr in the navy?
Will see.

If you would like to participate in One-a-Day, please link your project in the Tuesday's Tallies at Carole's blog, Gingerbread Girl.

An even darker cloud, looking like something from  "Independance Day (remember!) moved over. This was at 15h29, and look how dark it got:

And the heavens opened, in buckets.

Email ThisBlogThis!Share to TwitterShare to FacebookShare to Pinterest
Labels: My Mzansi

One-a-Day...Still towards a baby blanket

A baby is scheduled to be born tomorrow morning.

Eight and two half squares and some rounds of border need to be finished!

If you would like to participate in One-a-Day, please link your project in the Tuesday's Tallies at Carole's blog, Gingerbread Girl.
Posted by Stel at 12:24 10 comments:

I live in South Africa, a beautiful place with  a great climate (mostly), fantastic landscapes, incredible people. Tongue in cheek, it has also been labeled bipolar...because as high as our highs can go ('94 elections, '95 Rugby World Cup, 2010 Soccer World Cup, Madiba Day), so low our lows can go (1990's pre-elections, 2012 Marikana).

(Sit tight through the blah blah - it provides background):


We have crime with a capital C, because it is real bad. Now the reasons for that are many, and can be widely debated, and that is not the purpose of this post. But because it gets mentioned so often, by us, the locals, by the local media, by expats, you might think we live in war zone - which is not true.  There are places in this country I wouldn't go even in a police Casspir - but then, there are places I won't go in Brisbane, in Cork, in LA, wherever.

So. What people do when faced with crime, is to protect themselves. High walls/fences, dogs, armed response, gated communities and what not.  Never get in the street except in you car with locked doors and anti-hijack system.  That's if you have money.  The guy that sometimes does a small building job for us, lays at night in his makoekoe (sinc shack) and hopes and prays that no bullets will fly through the walls tonight, or that a thunderstorm won't wash through his little house.

When returning after an eight-month stay in Australia, we also considered estate living with armed guards etc.  We looked around, drove around, and then decided no: get a house for half the price, on a stand double the size (1300 m2) in very unfashionable lower-middle class neighbourhood - where many houses aren't even fenced or walled.  We did put up a palisade fence, have two dogs and the alarm system, but in six years now, only the top of a garden tap was stolen, and my son's bike.  No serious crime yet.  People walk the streets here, old ladies with dogs, kids walking to the café, playing in the park.  You don't really see that in gated neighbourhoods - only inside the walls.

The point is...mostly, South Africa is a safe space - out of the hot spots.  The above is the only crime we have ever experienced at our home.  Yes, my husband was hijacked once, at gunpoint, in a rural village that is known to be a hide-out for Gauteng criminals.  He was there for work, and was saved by Grace and the fact that his co-worker understood Sotho and could tell the hijacker that "this man was the one bringing water to the village".  So they took the vehicles and geophysical equipment and left them.

Now after this long ramble - I was getting so tired of listening to expats going on about "how unsafe SA was", and how "glad they were they could walk safely outside" and "go to parks" and what not. You'd think we couldn't poke our noses out of the door.  So I started an album on my Facebook profile , specifically about nice places, outside, outdoors, anywhere, that we actually enjoyed, safely, and I thought now to post some of it here, once in a while.

One day, we took a different route on the way home, and stumbled on this beautiful little park with humongously huge trees and play equipment. It has been a firm favourite since and many a Friday or Sunday  afternoon would be spent there. 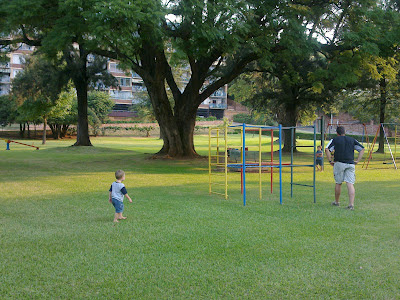 While they play and run and do things with Dad, I sit and crochet (yip, that's the pic in my blog header)