For ages I wanted to know How To Make those useful colour palettes, so I don't have to stand in the yarn shop and try to match yarn colours from a tiny little photo on the mobile...

(Thank you,thank you and thank you)

And now I'm playing away.  Some are better, some are not, who cares, it's great fun :-) 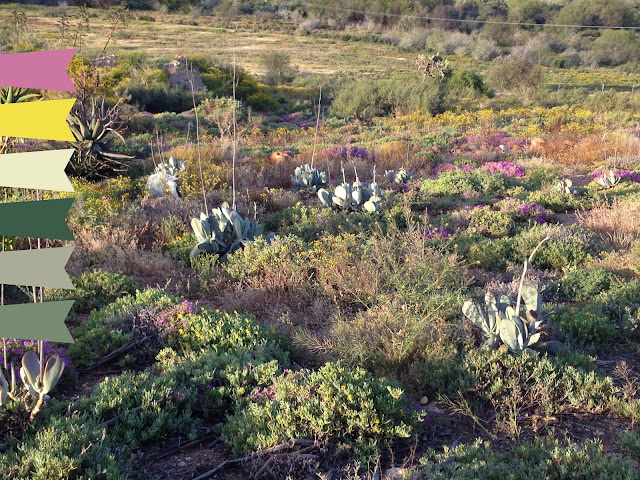 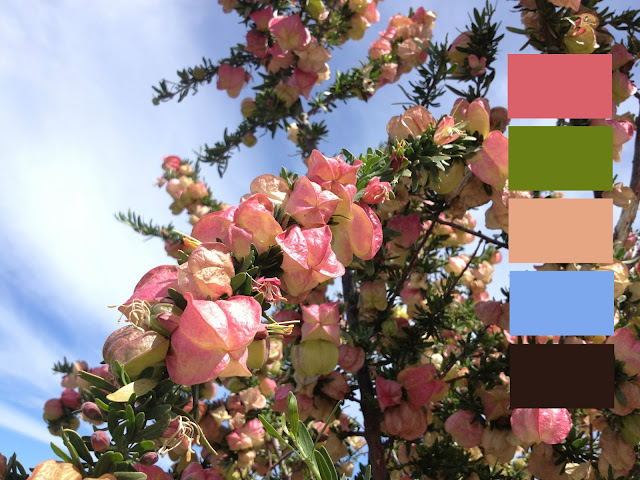 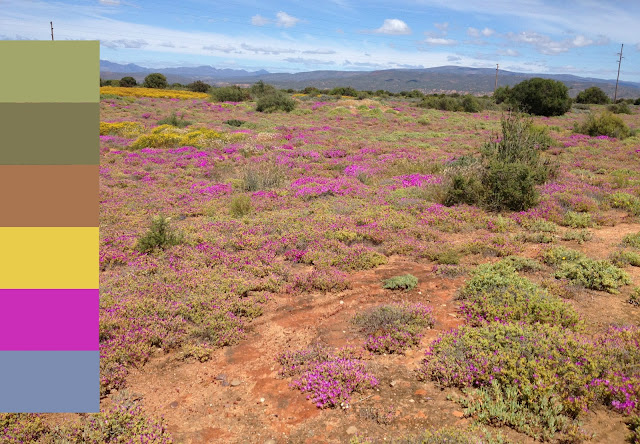 A member of our crochet group on Facebook posted this photo of a pincushion, with the recommendation that you fill it with steel wool covered in cotton wool, to keep you pins sharp...

My pins could use a cushion, as it usually can (can't!) be found all over the place and I'm always searching for it.


I was already mentally going through my stash, thinking what I could use, that would tie in with the nice green blind in my work room.  The Elle Premier Cotton DK worked, I had a couple of muted colours, and started hooking little hexagons as soon as we got home from holiday.  Of course I was in such a rush that I didn't properly plan the joining thereof, had to frog the lot and start joining again.


Then I realised it was quite a bit larger that the one in the example, which was  probably done with a much finer yarn.


(Mmm, maybe that wood is a bit dark as a background).


Anyhow, I had one pinwheel at hand to try it out!

And then I realised I never worked the ends away.
Pffff.

Email ThisBlogThis!Share to TwitterShare to FacebookShare to Pinterest
Labels: Hooked in 2013, Pincusion

Beanies on a road trip

We took a quick road-trip this week; roughly 1300 km in one day, Pretoria (Gauteng) to Reebok (Garden Route, Western Cape):

We don't mind the driving; my husband averages 5000 km/month for work, I did nearly the same.
The problem is when you're not the one driving...it can get quite boring.

So the boys had a Playmobile each, books to read and draw in and we stopped every two hours
for a quick runaround.

I had something to do 'redemption' with...

It wasn't a lot, and it was on sale, but still, I didn't have a plan with it.
That was, until one of the members of my crochet group posted about the need for beanies for premature babies at a hospital near her (and actually, everywhere in South Africa).

So beanies it would be and I promptly forgot a pattern (and mind you, never for once thought about searching for one with the exact iPhone I was taking the pictures with...blame it on fatigue, we arrived 36 hours before back from Cork via Amsterdam, a 90 min and 11h flight away).

I managed a flat circle, increased for a round or two, and then just continued with a few rows:

Back to the trebles, and now with the Rico Baby Cotton, I couldn't wait:

Then I tried working with a double strand...from one ball.  Yes.
The inevitable happened:

But I recovered and promptly returned to a single strand:

Between the stops and reading I managed five beanies.
Not too bad, I thought.

Tomorrow (Saturday), we'll take  on the return journey, this time over two days.  I'll be working on beanies again, as well as trying out squares for a placemat CAL we're planning with the Ons Hekel group.

Time to shake out the sand and do some packing!

My Mzansi - The Everyday

Early morning at the highway-stop. A few chickens were prancing around and this rooster just absolutely matched the colours of the Shell Ultra City.