Christmas in March happens when you get this gift of Moya yarns:


The very next day the new Ideas magazine hit the shelves, with a shawl pattern that had a very interesting motif...mmm, I didn't want a shawl, but I could do something with that Alek Arabesque...

Yes, it is also a very pretty star!

The stars accompanied me for a view days, all the way to school,

...and on a quick overnight trip to a nearby beach.

I was sitting outside with MIL, when two ladies walked pasted and stopped to see what we were doing - but then they became more interested in my grip! When learning to crochet, I tried out both ways - The Knife and the Pencil - and first gained control using The Knife :-)  But it looks like I might have a funny way of guiding the yarn with my left index finger - this baffled them.

The  pattern hooks up really quickly.  It actually turned out a bit larger than I thought it would, so I meddled a bit with the first round, trying out doubles instead of trebles, but in the end stuck with the trebles.  I used JAYG to join the starts directly.


And then I had a tiny little pile.

Now where shall I hang it come Christmastime?


Or maybe in a window? 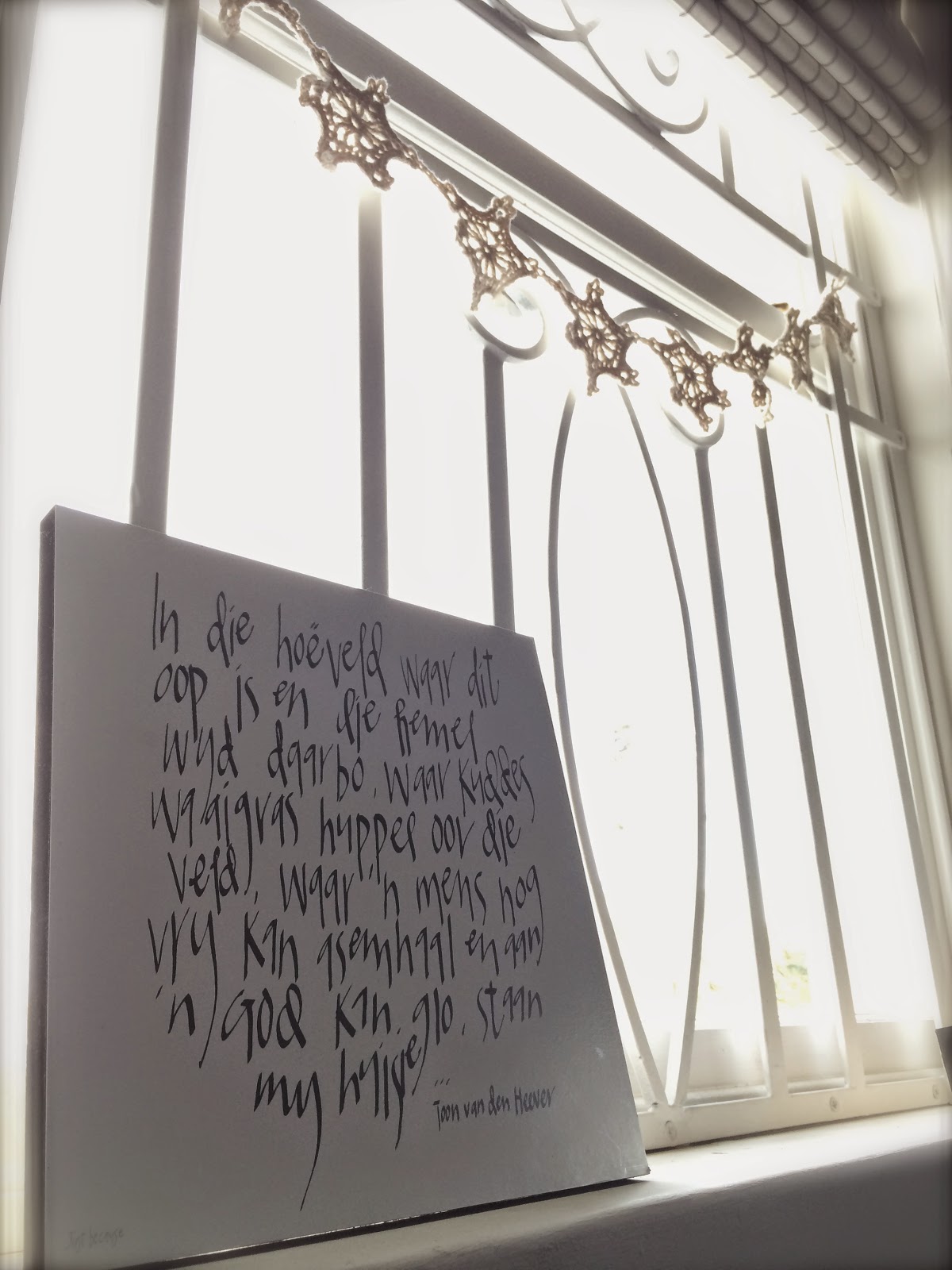 Moya Yarn is a DK, but on the thinner end of the spectrum.  The recommended hook size is a 3.5-4.  I used a 3, because I wanted a smaller, tighter star - but this was very difficult to work with.  I also didn't use a good quality hook; the point was too sharp and the process was slow and tedious.
(For the St Patrick's bunting I used a 3.5 Prym, which was an absolute pleasure.  I'll be trying out the nr 4 on project nr 3, and 4.5 on the one after that.

Moya Yarn is available from:
Moya Yarn
Yarn in a Barn
Scaapi

The Alek Arabesque pattern was published in Afrikaans and English in Ideas Magazine.

Also see here and here for original IG posts by Magda (rawrustic), and here for another beautiful interpretation by Anneke (crochetinpaternoster).

This post is also linked to Natural Suburbia's Creative Friday
Posted by Stel at 16:44 8 comments:

Email ThisBlogThis!Share to TwitterShare to FacebookShare to Pinterest
Labels: Alek Arabesque, Christmas, hexagon, Moya Yarn, stars, What I made with Moya

It's that time of the year again! 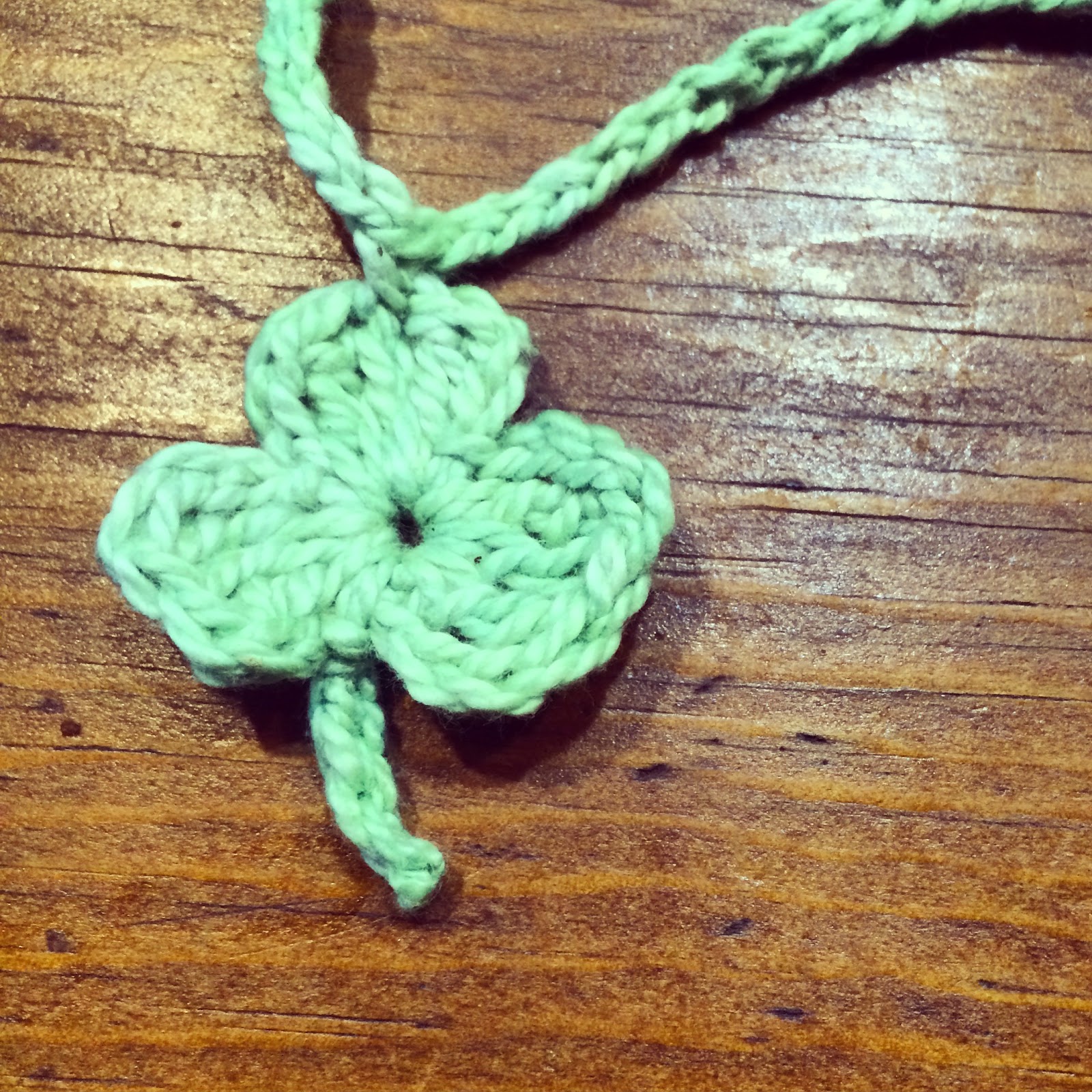 When I wear my silly green sock with shamrocks on, put on my dainty silver shamrock that my aunty brought from Ireland, make the best mash potato, have a little bit of a teary smile when thinking of my sisi living far away on that beautiful green isle, have a shot of Jameson then,  take the Irish flag to school and read the kids the story of St Patrick, and show them a real clover, and have them searching for four-leaved clovers in their backyards in the afternoon.

And, as usual - a tiny shamrock bunting - this one adorning the neck of the leprechaun the Gr 1 teacher with the Irish name dug out of her store room this morning :-)


I made this bunting with Moya Yarn's organic cotton in Apple, available from Yarn in a Barn and Scaapi

A roundup of more St Patrick's crochet patterns is available at Crochet Concupiscence.

Email ThisBlogThis!Share to TwitterShare to FacebookShare to Pinterest
Labels: Moya Yarn, St Patricks, What I made with Moya

My sisi's blanket for Laura

While I'm slowly nearing the end of my summer throw, I can at least brag with my sisi's Elmer Blanket.

She's good at making beautiful gifts for her in-laws, my sisi, and this one was made for her SIL Laura:


This was her first project done in Colours of Grace, of which she bought a bagful last year during the Yarn Indaba, and upon starting, immediately ordered more.

Colours of Grace is a 10 ply, hand-dyed organic cotton, resulting in a beautiful, slightly mottled effect, especially when when using a dense stitch pattern like she did.

She made one square per ball, using 28 colours

Oreo the cat also tried to claim it :-)

A last view in the harbour before to its new owner:


Colours of Grace can be ordered from Hilda at Yarn in a Barn, who delivers internationally.
Note that some of the current colours will be discontinued, but a new set will be released soon - we're looking forward to see the new colours!
Posted by Stel at 12:00 6 comments: