In the absence of anything being completed in the vastness that is my WIP-collection, some ladies at my group Ons Hekel came to my rescue with a beautiful topic for today:

A friend of theirs runs a wedding venue Tsekama, a private game reserve near Modimolle and she wanted a nice, new background for wedding photos - so what better than a yarn bomb?

And they didn't even use specific patterns - they hooked from the heart and improvised as they went along.

Is that a nyala ewe hiding in the upper right-hand corner?

Yes, even though we don't really have lions and elephant roaming the streets in South Africa, often you'd find a nearly-tame buck or two roaming near the accommodation in reserves.

Interesting fact - the njala provides the dividing line between smaller and larger antelope species: the female is called a ewe (as in all smaller species), while the male is called a bull (as in all larger species) and not a ram.
When in SA, drop that fact oh, so casually before the game ranger can do that :-)

Thanks to Gerda Grobler, who provided the photos
Posted by Stel at 14:23 5 comments:

At last, it was the winter holiday, but alas, no winter!

I love the winter holidays.  Three weeks of lying* in, or early-morning walks in crisp-cold air, hearty soup, my gran's souskluitjies, big, roaring bonfires in the evening, a hunting weekend-or two.

A quick drive to do some bass-fishing and have a quick braai, just 25 min from home.
I just made the fire and hooked a beanie:

We're experiencing a very warm winter.  Every morning I hopefully dress up with something warm and a scarf, only to discard most layers by lunchtime.  So it was with high hopes that I packed for the usual visit to the grandparents and, hopefully, winter rain.

But no, we hit the southern Cape in the midst of bergwind conditions, making the days ideal to spend on the beach, but no snuggling! But I did get to catch up on the smaller hooking projects:

At 1o'clock - Attemp numero 5 of the mezzaluna shawl.  Note: sit down in quiet with an hour or more at a time to work o this one.  Count.  Mark with highlighter.
Half past four - working with Karoo Moon handspun merino on the beach.  It became a lacy cowl for MIL.
Six: Graceful Shells poncho for me, also with Karoo Moon handspun merino...and then I didn't have enough!!I'll need at least two more balls.
Half past seven: The beginning of a flowery scarf at a local road stall.  The breakfast was great.  The flowery scarf became a baby beanie later.
Eleven o'clock - The Great Romany Blanket came out of hibernation!  It grew with 10 rows.  I must sit down more with this one. 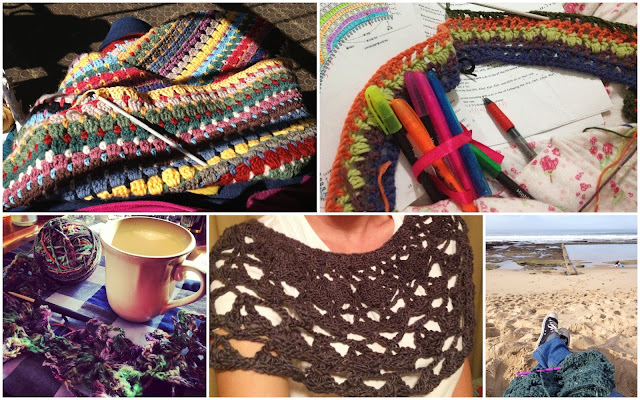 There was time for a little driving around and looking at the latest  at some of my favourite stops - Smitswinkel Farmstall, offering colourful granny blankets for the first time!
And De Dekke Antiques had this purple throw among piles of white tablecloths, a steal @ R390.  Depending on the day anything between 35-40 euro. 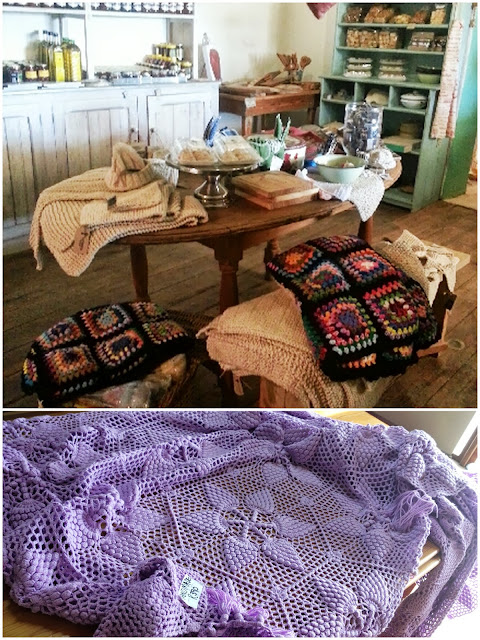 I took the boys to a small history museum in Hartenbos, and while they were fascinated by the Great Trek exhibits and the gun room, I marvelled at some very old examples of lovely hooking - a nighty and a beautiful table cloth (compare with Haafner's latest! Similar solid square with bobbles, the other way round.)

Also had a second look at the linen in Hartenbos Huisie...my sis and I will both hook a blanket for this room, and chose Elle Pure Gold colours based on these pillow covers and the stripey mat.  It is a secret CAL between us, she's already started but I've just decided what pattern to use...

And then rained, on the day we went home :-(

But all hope was not lost, as we were on route for a weekend in the highlands.
(South Africa's mos a world in one country; we do fly fishing in our own Highlands while staying in a mini-Grand Canyon)
www.komatigorge.co.za

During the day it was warm enough to fish, play in the river, paddle-boat and canoe, and by late afternoon it cooled down enough for a little port with my hooking.  By evening I stoked the fire to read read and read while The Dad did the braai. 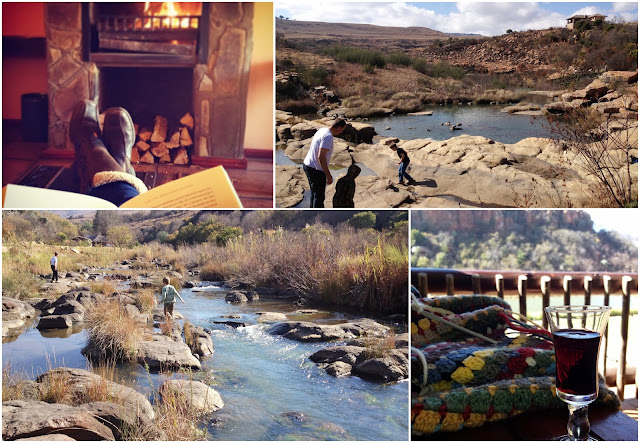 All in all, a great rest, with good enough progress on various WIP's and plans.

Still waiting for a good cold front, though.

* Show me the second language English speaker that doesn't at some stage confuse the lays/lies!  Again I had to make sure.  You'd think by age 42 I would remember.
So here's a neat link:
http://blog.oxforddictionaries.com/2012/03/lie-or-lay/
Posted by Stel at 12:20 6 comments:

Last year I wrote about Mandela Day, and what I did with my 67 minutes of community service.

Regarding the homeless man, I must sadly report that he is still there, just moved around the corner now, and spends his days sitting on the sidewalk, sleeping, or drinking beer (he sells what ever he gets, and buy beer from the liquor store on the opposite corner).

So my beanie this year won't go to him.

I met two friends in a local coffee shop, and we hooked beanies for various purposes.  Mine will start a second stash that I will donate at some stage, most likely to a hospital.  The first stash  was donated to Operation Winter Hope .

Cappo by my best barista, MX, at Pure Café.
Crumbs of a Two Nut Chocolate Torte in the background :-)

Newspapers, radio and tv were wishing him well since early this morning, with reports flooding of variuos community service projects people are doing today, from coocking and serving food at old-age homes, to learning a domestic worker to knit! 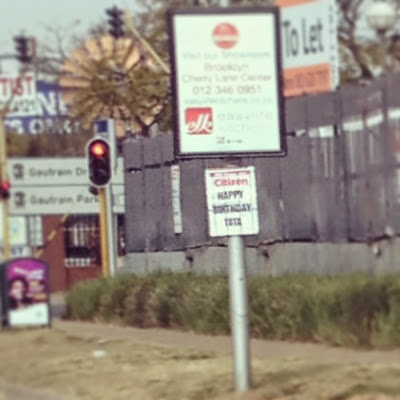 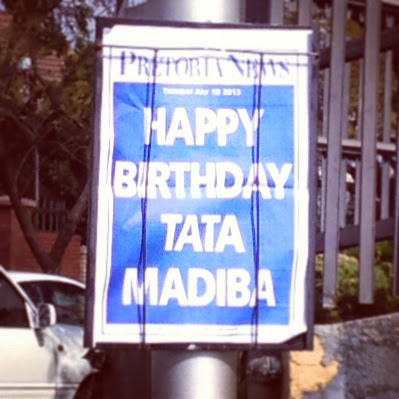 "Tata" being a respectful way of referring to an elder.

Will update on interest projects reported!
Posted by Stel at 16:16 2 comments:

Email ThisBlogThis!Share to TwitterShare to FacebookShare to Pinterest
Labels: beanie, My Mzansi

(No, I never had the opportunity to meet him).

But in a week when our country watched anxiously as his condition deteriorated, quite a few pieces came by on Facebook, in newspapers, on other social media, about meetings with Mr Mandela, impressions of him etc. So obviously there was a lot of thinking back.

In 1991, I was a 2nd year student at the University of Pretoria.  Although the uni was "open" for all races, that was the first year that the residences were opened, and our res was one of the first.  It was a modern res, with four "apartments"on each floor, housing 5-6 students in each, and our floor was chosen to house two new girls: a senior music student, coloured, and a fellow agric student, a "Rehoboth Baster".

Now, before anyone take offence, that was how people was classified officially in my country then (and unofficially in the rest of the world).  Coloured referred to anyone mixed-race, or descending from mixed race, and the Rehoboth Baster refers to a community in the Rehoboth are of Namibia. They are still very proud and  protective of the name.  And the  irony - it took me 6 months the year before to realise she was "non-white", she was lighter-skinned than me, with bright green eyes, and it was only when she talked about Rehoboth that I first heard about them.

Now, I grew up in the "old" South Africa, with very restrictive laws and mindsets. Indoctrination, anti-communist and anti-integration propaganda went down to school and church level. Very few people voiced different opinions, if they had any. Very few actually new who and what the ANC was, what they stood for and wanted to achieve; to white South Africa it was the forbidden organisation, communists and terrorists.  I was then in the lucky position to have grown up in a relatively politically neutral house, my dad was never a member of one of the super-Afrikaner groups.  He was also working for the then Prisons Department, with many of the well-known names under his care, so we did know a bit about these people.  I was 10 when I saw the cages in which maximum security prisoners had to sit and literally break stone into gravel at the Victor Verster prison where Mr Mandela was held for his last years, when we visited Robben Island and saw the stone quarry  etc.

Now, that was the context of this whole long train of thought!

So, after his release in 1990, Mr Mandela was touring the world, speaking to people, was not even elected as president of the ANC (only later that year). The country was in a bit of a turmoil with a lot of hope blacks) and a lot of fear (whites). A lot of frustration, because we didn't know what was going to happen.

Then he came to visit our University, one of the oldest, an Afrikaans "stronghold". I went along, curious, wanted to hear what he had to say.  I went alone.


The atmosphere in the amphitheatre was quietly excited.  Obviously many non-white students were there, the white "liberal" groups, and I think, many curious ones like me.  Lots of security.  And then the big man walked onto the stage, among tremendous cheering.  It was really an exciting moment to be part of.  But, unfortunately he couldn't even get into his speech, as the next moment, a white right-wing student ran onto the stage, storming towards Mr Mandela, who within seconds was surrounded by security and taken off stage. That was more or less the end of the meeting.  Some shouting, some singing, closed with the singing of Nkosi sikelel 'iAfrika (oh, the irony, I learnt the words of that as a 5yr old in 1976, our nanny taught me!)
Translation here , original audio here and current anthem here (just love how it sounds in a full stadium!)


It was quiet as we all left. I walk to the res, feeling so absolutely embarrassed and ashamed of my people that day.   Each to their our opinion, but the bad behaviour of that day, was something I wanted to totally distance myself from.  Of not being able to contain yourself, to just listen to what he would he would say, or if you didn't want to hear, to just stay away.

Back at the res, I walked past our Rehoboth girl's room where she was sitting on her bed, and we chatted about the events of the day.

I will never forget when she said, quietly crying, that "your people will never accept us".

That day, my mindset shifted and I knew that my country had to change, It had hurt too many people.

That was my Madiba moment.

PS - read an article this week about a man who worked as a campus security guard that day.  He described how Mr Mandela didn't say one negative word about the events of the day, after being run to his car. He just thanked him.